Although it is nearly summer here in Australia, I have got a pre-exam cold, and what I have really been craving is a hearty meat stew to blow away the cobwebs. I know it is getting very chilly in the UK now too, so this is perfect on a dark autumnal eve.

Like usual, I got this recipe from BBC GoodFood, and it didn’t disappoint! I only loosely followed the ingredients and measurements and added a few extra ingredients. My housemate also let me use her slow cooker, which was a great new experience for me.

I began the dish by prepping all my veggies. 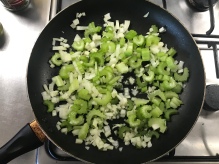 Firstly, I chopped the celery into even (ish) chunks, the size is up to you! I am not a fan of celery at all, but once it was cooked, I was pleasantly surprised that it added to the flavour. Maybe these chefs do know what they’re talking about?! I halved the carrots, also cutting them into rough chunks, along with one leek, and finely diced the white onion. I also quartered the potatoes, ready to be parboiled.

In a large frying pan, I added the onion, celery and a glug of oil. This cooked on a low heat until the ingredients began to soften, and the onion started to turn translucent. Following this, I added the carrots, leek, bay leaves and dried thyme and continued to fry for a couple more minutes. In a separate saucepan, I also par boiled my potatoes for around 10-15 minutes.

When all the veggies were mixed, I added the tomato puree, along with 800ml of boiling water. At this point, I transferred all of the ingredients, including the potatoes, into the slow cooker and ensured everything was combined, before crumbling over the beef stock cubes. At this point I also added a large helping of pepper and gave the stew a big mix. I tasted the broth and added a little more thyme.

I cleaned out the frying pan and began to prep my meat. I used a combination of beef and kangaroo as this worked out as the best price, as well as the fact that I am trying to incorporate kangaroo into every meal whilst I have the opportunity! Obviously, if you are in the UK and you do not know an exotic butcher, beef will do just fine! 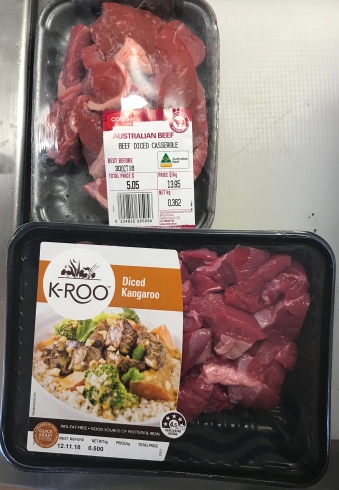 I pan-fried the chunks of meat in batches, each with a little oil, until they were all well browned. Once this was complete, I added the meat to the slow cooker. If at this point you need more liquid, you can add extra water.

I gave everything a big stir and it was ready to cook! I chose to use the high-power setting, which meant that cooking time was 4 hours, however if you are going to be out all day, you can leave it on low for 8-10 hours. I guarantee as well, if you will be out the house all day, you will be greeted at the door by amazing rich meaty aromas.

I checked on the stew occasionally, giving it a stir now and then, to make sure all of the seasoning had time to absorb into the veg and meat. For the last 30 minutes I removed the lid, to reduce the amount of liquid in the stew and to thicken it up slightly. This can also be achieved by adding 2tsp of cornflower and a splash of cold water in the last 30 minutes of cooking.

Finally, I was able to take a break from revision and have some well needed brain food! I added a handful of chopped fresh parsley to finish the whole dish off. The reason I chose a stew was in an attempt to kick a horrible cold, and although I cannot claim it had medical properties, it felt like a warm hug!

I managed to get 6 portions out of all of the ingredients and shared it around my housemates too. I served the stew with thick gluten free toast; however, the recipe recommends a buttery mash accompaniment as well. I must add, the recipe does not include potatoes, that was an extra I added, but I am sure two potato varieties in one meal is not a bad thing!

The overall dish cost more than I would usually spend on cooking, mainly because of the price of the meat, however, it was really worth it. I also have lots left over in the freezer, for any occasional blustery Australian days or sudden runny noses!

Here is the link to the original recipe: https://www.bbcgoodfood.com/recipes/slow-cooker-beef-stew