For the last of Jack’s birthday celebrations I had planned for us to go to London to see a show, and luckily this also gave us the opportunity to go on a new foodie adventure! The weather was really on our side and we arrived in London at about 1pm. The heat when we got off the train made it feel like we were stepping off a plane somewhere far more exotic than London Bridge.

The food journey began in Borough Market. I love it there, all of the amazing smells, the bright colours, the food samples- what’s not to love? The only issue I have every time I go is what to choose to eat?! Yesterday my choice was slightly easier as we had already booked a table for an early theatre supper in Covent Garden, so I knew I didn’t want to be too full.

We wandered around, scoping out the food stalls and checking our options. We tasted amazing cheese, bread and oils, which fuelled our search, and after a few laps I decided on a falafel wrap. Jack was saving himself for dinner so had a few bites of my wrap to keep him going. 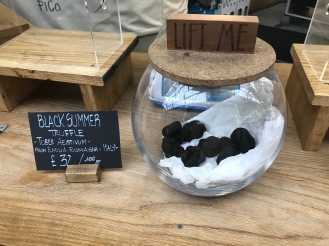 Borough Market was far quieter than when I have been before, mainly full of business men and women in fancy work wear- not what I would want to be wearing in 26-degree heat! However, this meant there weren’t any long queues and we were able to find a pavement in the sun to perch on. The falafel was delicious and the salad accompanying it was fresh and tangy. I have no complaints I loved every mouthful, and I think Jack liked his nibbles too.

After my first Aperol Spritz of the year, and Jack’s first pint of the day, we headed off to Brixton to meet up with a friend that works in a beautiful bar called Canova Hall. The drinks list was plentiful, with gins distilled in house, a wide range of cocktails and lots of beers to try too. The space was large and light and had a great atmosphere. I went for an Apples and Pears Collins which came in a glass bigger than my head- trust me I am not complaining though. The cocktail was fresh and perfect for a summers day. 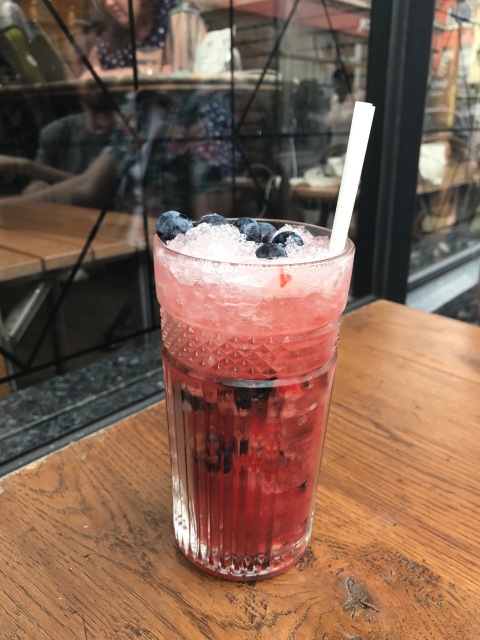 After our second round of drinks it was time to head to Covent Garden to Maxwell’s Bar and Grill for our table reservations. Booking at 4.30 we managed to time this miraculously well, qualifying for both happy our and the theatre menu.

As I had already started on the cocktails I thought it would be a shame to stop… so my first drink was a killer zombie. Served in a large Tahiti Tiki glass with a burnt orange and crushed ice, the mix of rums and liquors was a great start to my meal. Jack also followed me on the cocktail route, starting with the watermelon martini. Somehow, he always picks flavours that I don’t like, maybe he’s scared I’ll drink it all otherwise!

The theatre menu turned out being a really good deal at £11.95 for two courses. With 4 starters to choose from and 6 mains there were dishes we both liked. I started with the crispy cod goujons followed by the Maxwell’s old timer burger. Jack’s
choices were BBQ wings and ribs for his main- meat on meat!

The food was really tasty and even though the wings ended up being a lot messier than anticipated, after 2 or 3 wet towels to clear up sticky BBQ sauce we were ready for our mains. I chose to have my burger cooked medium rare and it was cooked to perfection. Still pink in the middle, it oozed with meaty juices that were soaked up in the light brioche bun. The gherkins were my fav bit! Jack’s ribs, once again very messy, were dripping in glaze and he really enjoyed them too. The fries were thin and perfectly salted and the apple coleslaw was fresh and fruity.

Although there was the option to add a pudding on, and they sounded great, we were both too full up, and instead chose another cocktail. This time I went for whiskey, having a tall Jack Daniel’s based drink and Jack kept it fruity with a lychee gin cocktail.

The food and drinks were really good, and the staff were also really accommodating and helpful. I would definitely recommend anyone who loves meat, lovely cocktails and ginormous milkshakes to give Maxwell’s a try.

Before we were due to go to the theatre we had time for one last stop… for ice cream. I must say at this point, about 30 mins had passed since we had left Maxwell’s and watching the street performers in Covent Garden flipping around had made me work up an appetite for ice cream. There were loads of shops around the main square selling sweet treats, but I decided to try Venchi. The storefront was luxurious, covered in gold, and the queue out the door could only mean good things- delicious ice cream. I only had one scoop, a tasty salted toffee flavour in a small tub. As it is central it was quite expensive, but I didn’t mind treating myself a little after a great day.

We truly did eat and drink our way around London yesterday and I am so pleased I was able to try lots of new things and go to new places. I think I will have to wait a little until my next trip as the price of alcohol is a lot and I am not made of money!!!