The second day was slightly different to the first, primarily because we spent a lot of time prepping and tending to our bread we were making. I won’t go into loads of detail in regard to the bread, but here is a little rundown of what we did.

We were baking two loaves, a wheat loaf and a sourdough. Although bread making isn’t something I have ever been particularly interested in, I think I saw it more as a hobby for those who stay at home, I did find it strangely therapeutic. Also, as it was unlike anything I have ever done before, I was very proud of my accomplishment when it was finished.

We actually started prepping our sourdough on the Saturday as it had to be left overnight in the fridge for proving. I think the thing that has always put me off a bit with bread making is the time you have to put into the whole procedure. The folding, and kneading and cooling and proving, and this wasn’t any different.

With precise timings, on the Sunday we had to fold our sourdough each half hour, ensuring there was lots of air so that the bread wasn’t dense. With the wheat loaf the method was slightly different, and we spent around 15 minutes kneading the bread and stretching out the gluten on our worktops. Connor showed us a few different methods and poo-pooed Paul Hollywood’s technique when he is on the TV. It was a lot more labour intensive than I had imagined, however, like I said, it was therapeutic. 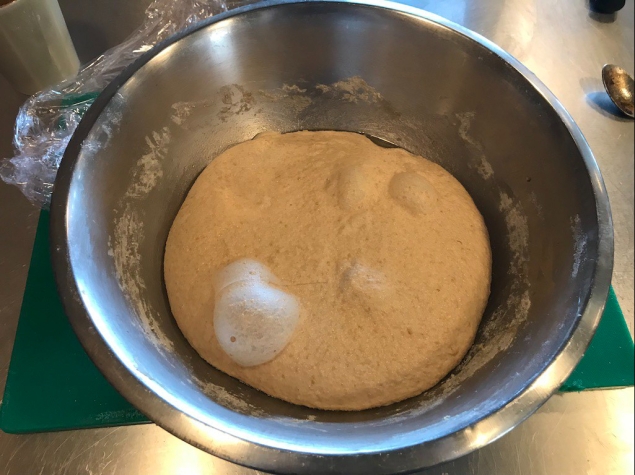 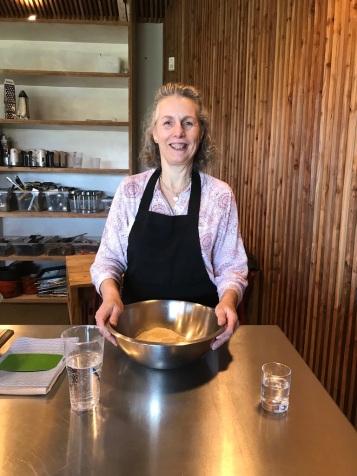 One of the methods we showed us involved slapping the bread onto the metal worktop, I must say this did seem a favourite with the men in the group. There must be a link between asserting your masculinity and slapping a sticky wheat bread dough onto a steel work surface?

Anyway, after all the different techniques had been used, finally both the sourdough and the wheat loaf were ready for cooking. After using some fancy proving baskets and rolling techniques, the loaves were shaped and put into the oven. First the wheat loaf was baked, turning the bread 180 degrees after 15 mins, it was ready in about half an hour. Although mine had a slightly burnt bottom it had actually come out very well- I was pleased anyway.

The sourdough was cooked in a big le creuset dish. This enabled the loaf to keep its round shape, whilst keeping the steam in the dish to improve the baking. Instead of spinning the loaves, this time we removed the lid of the le creuset dish and cooked the bread further, allowing the top to crisp up.

I have missed out quite an important point, so I will interject it now. Before both loaves went into the oven it was really important that they were scored. Scoring meant that the direction the bread expands whilst baking can be controlled. This method gives a loaf of bread the curve on top that you see in bakeries and supermarkets. 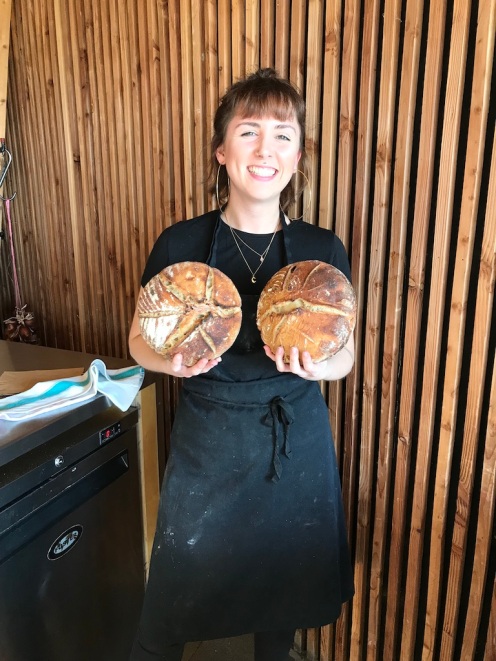 Ladies and their buns! 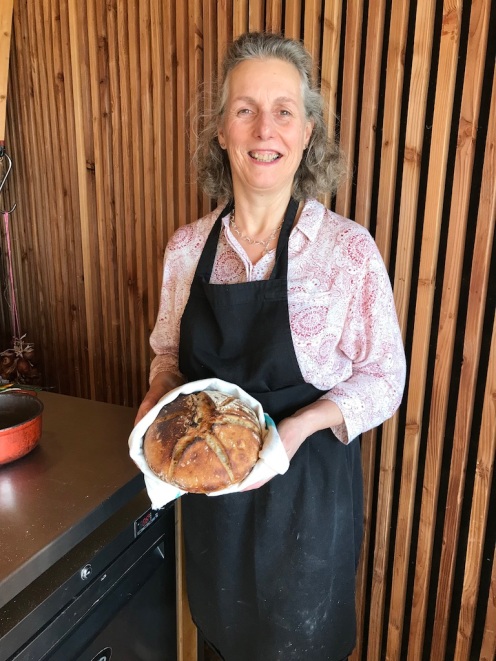 Both of my loaves came out looking lovely, and they are now sliced and bagged ready to go into my freezer back at Uni. I have tried some of Mum’s sourdough, which was super yummy. I love the almost tangy flavour of the bread. Once my wheat loaf was sliced last night I made myself a lovely chicken and avocado sandwich for my train journey home today which I am very eager to try. However, as I am writing this now, I think that eating my lunch at 9.16am probably isn’t the best idea!

Although I will not be rushing home to become Brighton’s best bread maker, I do really appreciate the time and effort that goes into baking and will think about this for each mouthful of bread I eat.