I have visited Pascere once before, before my blog had begun, yet I knew this is was somewhere I really wanted to write about. The whole restaurant feels luxurious, and the food is inspiring. As someone young who loves cooking, I love tasting new food and new flavour combinations, as well as seeing how beautifully presented dishes can look.

Jack and I were very keen to visit Pascere again, Jack especially as he fondly remembers the amazing bacon jam that accompanied his main course on our first visit. Bearing in mind the first time we ate here was October, this bacon jam has really left a lasting impression on Jack, with it often reoccurring in conversations about food. Although this ingredient didn’t feature on the menu today, there was a whole host of new flavours for us to try.

As I was scrolling through Instagram the other day an ad popped up, one of those sponsored pictures that appear on your timeline. Usually they aren’t that useful at all, however, on this occasion it really was. The advert was for Pascere’s Power Lunch offer, 2 courses for £14 or three for £18. As this offer is only running Tues-Fri in March, I knew it was too good to miss.

When we arrived, we were shown to a table upstairs, in a dining room that featured an open kitchen. The room was filled with natural light, and the furniture was chic yet comfortable- which I think is quite rare these days, so many places go for style over comfort. Although we were both a lot younger than the other customers, we were treated equally by staff, who were very attentive and lovely throughout visit.

Today I opted for a soft drink, as I am feeling slightly under the weather (my winter veg soup hasn’t quite kicked the cold just yet!), as did Jack, however they do have a great wine selection, and amazing champagne that we sampled before. Our glasses were topped up with ice cold tap water too throughout the meal which was also a lovely touch.

The menu is small, however there is a great selection of veggie, meat and fish- something for everyone. I think the size of the menu really reflects the level of cooking, there doesn’t need to be hundreds of dishes because the ones they do are executed so well and contain a wide range of tastes and textures.

After we had ordered our food we were both delivered two fresh, warm bread rolls on a lovely slate dish with homemade butter. The brown roll was made from stout, and the white from onion, however I cannot remember the other specifics- I must’ve been too busy eating it! The butter was sweet and silky yet it went perfectly with the salty warm bread. I was unsure if I really needed two bread rolls before my dinner, but I couldn’t resist.

For starters I ordered scallops and Jack chose mallard breast. I have been binge-watching Hell’s Kitchen at the moment and seeing as none of the chefs seem to be able master the scallops, I decided I wanted to try them and see what the fuss was about. The pan-fried scallop was accompanied by Jerusalem artichoke, glazed chicken wings, artichoke puree and finally topped by passionfruit oil. The soft texture of the scallop went so well with the slight crunch of the artichoke and the smooth puree. The chicken was also delicious; I think Jack was slightly disappointed when there weren’t two big chicken wings on my plate. Nevertheless, the dish looked and tasted amazing, and although it didn’t look very big the portion was perfect.

Jack’s mallard came in three forms: the breast, a parfait and the leg, all of which tasted amazing. I find duck a very rich meat with a deep flavour, but in the small portions that Jack was served, I didn’t find it overbearing at all. The duck was accompanied by a carrot and clementine salad, the coldness of which created a lovely comparison of flavours and textures.

As we were sat upstairs we were able to watch the chefs at work, I was quite transfixed. The way the plates were assembled looked like a work of engineering, each precise ingredient placed after the next. As I have been in my fair share of kitchens at work I always marvel at the seemingly calm and collected chefs that work in open kitchens. There was no shouting or swearing or throwing utensils (luckily), which made the experience really pleasant to watch.

Now… onto the mains.

Similarly, to our starters, Jack stuck with meat, and I with fish, although we did both try each other’s. I chose halibut for my main, which was served alongside a delicious clam chowder, vegetables and some kind of tasty foam. Once again, I am sure the waitress did explain each dish, but my mind was too busy thinking about eating it all up. The fish was flaky and perfectly cooked, and the clam chowder was salty and full of flavour. 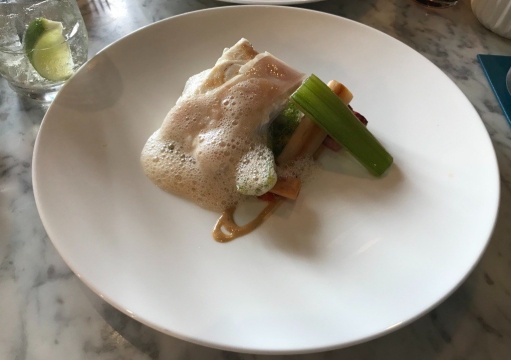 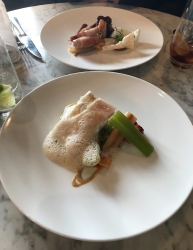 Jack’s meaty main was aged pork loin, braised cheek, cabbage puree and pears. The pickled pear was sweet yet sour and added a lovely bite to the soft pork. Jack was certainly very pleased, polishing off the plate just after I had finished mine.

This time round we decided to just stick with the two courses, as the portions left us full but not stuffed. I was rather tempted by a dessert however, as all of the sweet plates that left the kitchen looked bursting with colour and flavour. A particular chocolate pudding caught my eye, with a salted peanut ice cream- it sounded like heaven.

Maybe next time I will pop in for a pudding and an espresso martinti!

Overall a really enjoyable experience, I would really recommend to foodies of any age.